Anne of the Fens - Chapter 1 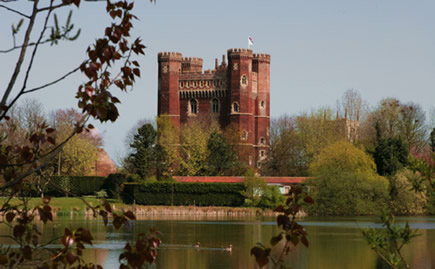 I looked around and saw a splash of green disappearing around the dark corner of the church, in the direction of the market square.

“I’ll catch her,” I shouted to the rest of my family as they filed into St. Botolph’s.

Confound my little sister! I ran after her, wishing I were not dressed for Sunday services in a skirt that stood out to make me twice my usual width. I was nearing the corner of our huge church when I stubbed my toe on the cobblestones. I swore under my breath then hurried on, Sarah lost to sight.

Last night, Father had carried on at dinner, calling the May Fair a sinful nest of rogues and scalliwags who dishonored the holy day, stuffed their faces with roasted meats and sweets, listened to lewd plays, picked pockets, and assaulted young women.

I knew that Sarah had heard nothing about the dangers, only the sweets. I would find her at the booths that sold anything sugared. How did I know her so well? Mother had chosen the right person to mind her—I cared nothing about the confections, but I wanted to see the dancing and the plays. I wanted to see the young men. How would they look at me in my beautiful blue Sunday gown? The only men I got to see were in church, dressed in black and thinking holy thoughts. I wished I could keep my own thoughts more holy.

I rounded the corner and stopped in horror, choking from the smell of people, sheep, horses, goats, pigs, cattle, and chickens. The square was packed so full that nothing could move. I could not see Sarah nor push into the fair at all. There were hundreds of sheep in front of me, and I kicked one in frustration. It bleated, moving only a little. Sarah, smaller than I, would be trampled if she tried to move among them.

I would have to force my way through the flock and hope I would not encounter their owner. It was at least safer than trying to get through crowds of men who might attack me.

As I neared the last of the sheep, a whirl of greasy smoke signaled the meat vendors. Perhaps the sweet stands were nearby. It was the barley sugar drops that would call to Sarah. I found the meat vendor, where men stood about gnawing on huge ribs of beef or turkey drumsticks. I could spy barley sugar in the next stand, and swarms of people, but no Sarah. Had she made her purchase and gone? I pushed to the front of the line, in spite of the curses thrown at me, and shouted at the vendor, had he seen a young girl in a green dress? He acted as though he hadn’t heard me. His face was covered with horrid pock marks, and I shuddered as I turned away.

Had someone picked up Sarah for a ransom? Her clothes would show that her family had a little money. I was out of breath from the pushing and pummeling of the crowd, but at the thought that she was gone I felt weak, and my breath came truly fast.

Which way to go?

I heard music and found myself moving toward it with the crowd. Several couples danced wildly. As I stood there, a young man grabbed me by the waist, pulling me toward him. He was handsome, with blond curly hair and a bold eye. I could smell beer on his breath and the perspiration that stained his red tunic.

My skin tingled where he touched me. I shut my eyes as we twirled, and blood rushed to my head. It was what I had imagined. What I had wanted. But it was happening so fast. I felt a pang of fear when he pulled me closer, his body warm against me, and I kicked him, aiming for his shins.

He yelled in pain and let me go. “You common-kissing harpy!”

Shaking, I forced myself into the crowd again, looking wildly about. It was then I heard a woman’s voice raised in anguish.

I turned to see a young woman upon a stage, hands clasped to her heart. I stopped, knowing I must hear more. She called for her lover, and he answered.

People shoved at me and stepped on my feet, but I did not feel it. I forgot about Sarah, I forgot about my family in the church, I watched on. The lovers’ families despised one another, but Romeo and Juliet intended to overcome their hatred. They might be forced to say good night, but they were determined to marry.

“Parting is such sweet sorrow.” Romeo’s voice was loving as he reached up to the balcony for her hand.

A sharp jab in my side brought me out of my spell. There was Sarah, icing dripping down her chin. I wanted to hug her and shake her at the same time.

“Ha, ha, found you out! Wait till I tell Father you watched the heathen play!” she said.

“Saucy urchin! Where have you been?” But it was obvious from the icing where she had been. After the sweet stall she had found the cake stall, and I had missed her.

I grabbed her by the wrist and pulled her toward the gate. I led her back through the sheep fold, in spite of her protests that she was stepping in so many droppings that her shoes were in ruins. When I looked down I saw that my lovely blue skirt was covered with dust and grime.

At the edge of the sheepfold, a group of beggars stood. One, a large man in a rat-brown cloak, barred our way as we tried to pass out of the fair. Thin white hair fell over his forehead. He held his hand out toward us, as beggars do, and the open sore in his palm, crusted with pus, made me recoil.

“Do I offend you, Puritan gyle?” He had a Scottish accent.

I was both frightened at his blocking us and annoyed that he could tell so easily that I was a Puritan. I was not dowdy. My lace collar had eight inch points and my flaxen blue dress, however soiled, was in the latest fashion.

“Let us pass.” I tried to sound firmer than I felt.

“For my good will. For your good luck in coming out unhurt, two girls alone.” He barred the way, and his body seemed menacing.

It was true that I had not seen other unescorted females in the fair. I reached into my pocket, found a couple of farthings, and put them into his disgusting palm. He looked at the tiny sum with contempt, but he gave way.

“I may see you again, Puritans,” he shouted, as we ran on toward the church.

Sarah scolded me for giving him money. “I could have stomped on his foot, and we could have run past him.”

“There were other beggars there, probably his friends.”

She continued to cross me. “You didn’t find me, you know, I found you. I was going back when I saw a gaping buffoon watching the play.”

In the market we passed the notice board and we both stopped to look, though Sarah was not a good reader. The board was an important source of information about what was happening, and everybody read it regularly. I recognized a notice urging people not to pay the King’s tax, a notice I had seen before. Sarah asked what it said, and when I told her, she asked why someone would have posted it.

“To get more people to know that he thinks the King is a bad man,” I said, trying to explain it in terms she would understand.

Satisfied, she looked up at me with a crafty smile. “I won’t tell about the fair if you don’t.”

I was torn. I should not let her get the better of me. However, if I told, Father would be so angry, both at Sarah and me. Father had a temper, and with all the conflict going on now in England, he seemed to explode even more than usual. The whole family would suffer for days.

No real harm had come to either of us, although Mother would despair over our clothing. In the end, I wiped Sarah’s chin with my handkerchief and told her I would not tell if she promised never to do such a thing again.

She swore by all that is holy, but there was a smile on her face, and I did not believe her.

What Ben Franklin Inspired in Me

“Dost thou love life? Then do not squander time, for that's the stuff life is made of.”

I’ve been meaning to write these days, form regular habits and follow through more consistently on telling stories that lie embedded somewhere between my conscious and unconscious mind. It is getting it out that I am having problems. Not from writer’s block, but from a bad case of procrastination.

Read more: What Ben Franklin Inspired in Me