Legacies, Lies and Lullabies: The World of a Second Generation Holocaust Survivor

FORWARD: WHY I WROTE THIS

For fifty-eight years, I've been harboring within me an epic family story, lying dormant beneath the surface and threatening to eat me up alive: My mother and maternal grandparents were Carpathian Mountain People who, for four years, lived in a snake pit, often saw dead people, and worked for murderers. What is even more absurd is that the world believed their community was a cultural center.

No, they weren't criminals, just honorable, valuable, hard-working people, with normal human frailties. Their "crime" was being Jewish in Czechoslovakia in 1941, for which Hitler's Third Reich incarcerated them in the Terezín concentration camp. Only about 75,000 people survived the Nazi camps; of these, about 3,200 adults and 150 children  survived Terezín. Miraculously, three of them were my mother and her parents. I am alive because my grandfather made custom boots for the SS, the elite Nazi officers.

I'm now one of about half a million children of Holocaust survivors alive today, who grew up in the shadows of their family's trauma. Many of us second generation (2G) survivors are imbued with “the unbearable lightness of being” (the title of a book by Milan Kundera, set in the Czech Republic), cursed and blessed at the same time, in a perpetual state of mourning for that which we have never known. The truth is, we're all partially meshugener (crazy)! We were raised differently than other children, and like our survivor parents, we carry emotional baggage from the Holocaust.

I have always been a Holocaust junkie, compulsively devouring wartime stories with morbid fascination. As a child, I would relish watching my grandmother cook and bake while telling me her family’s experiences. Her face and emotional expression would become a kaleidoscope of laughter, animation, tears, and despair. Since I was a young artist, I loved how my grandmother figuratively painted for me the picture of her amazing history, in intricate detail. I was absolutely riveted; I couldn’t get enough. I knew this information was precious. It was part of who I was and who I would become.

My story includes the following ingredients: what led to the Holocaust, what life was like in Terezín, how survivors and their offspring were personally affected, and what this means to future generations. Of course, the story wouldn't be complete without some personal family melodrama, expressed in poems, recipes, travel notes, and essays.

Now, eighty years after the rise of Hitler, the world is losing its Holocaust survivors. As the survivors are dying off, we must never forget this shocking chapter in world history. Second generation survivors are the only ones left to bear witness for those who can no longer speak for themselves. I feel it is beshert (meant to be, destined) that I try to document, understand, and memorialize my family’s past. The experience has been life-affirming. So, I give you the story of my mother and her family, my own real life heroes and heroines, of which I am so proud. May their history never be forgotten, and may the world never know another Hitler.

Resurrecting Emily Post and Essential Manners for Men and Couples 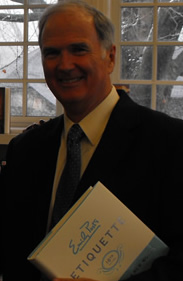 This weekend (3/17/13) there was an intriguing lecture at the Tuxedo Library entitled the Essential Manners for Men, given by author Peter Post, the great grandson of the famed Emily Post. He spent the good portion of his time providing an overview of Emily Post’s life while discussing the family role to help carry out her legacy.

Peter Post is the managing director of the Emily Post Institute and author of 5 books on manners –for men, couples, business people, and golfers. Central to his discussion was clarifying the role etiquette plays in our lives. Post stressed that etiquette is a means of building relationships and a way to prevent problems. Key points included:

In Manners for Couples, Post writes, “Etiquette is not about being excessively or insincerely polite with each other, or living by a set of artificial rules.” Rather it is acting with consideration, respect and honesty.

Emily Post was born in Tuxedo Park in 1872, the daughter of architect Bruce Price, who was responsible for the planning and development of Tuxedo Park. Some interesting facts about Emily Post:

After the lecture I purchased a copy of Essential Manners for Couples.  Having started reading it, I’m looking forward to continue working at building a more positive relationship with my significant other. With ample tips fostering good manners, I hope to achieve that result. I also look forward to discovering the life of Emily Post through her writings and biography. 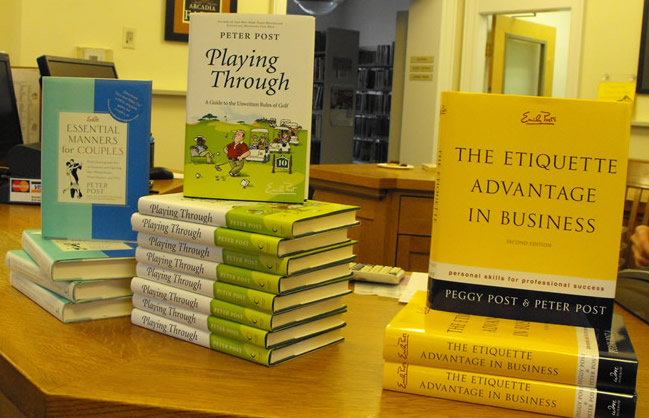