My Day on an Alpaca Farm 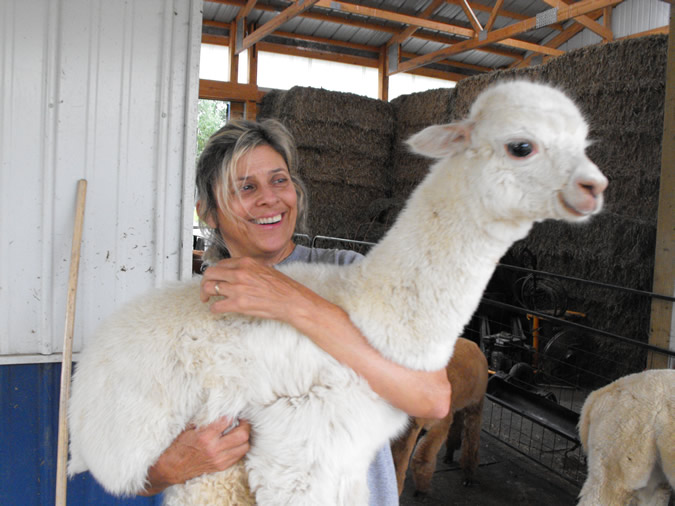 Some places draw you back over and over again - like they do at Shalimar Alpacas. Last week I had the wonderful opportunity to work on their Alpaca farm, after dropping by on several occasions to admire this unique breed of animal. Patricia Gillotin, owner of Shalimar Alpacas, graciously opened her doors to her farm, inviting me to join her in her daily routine, which entails two hours in the morning and another hour or so in the evening. 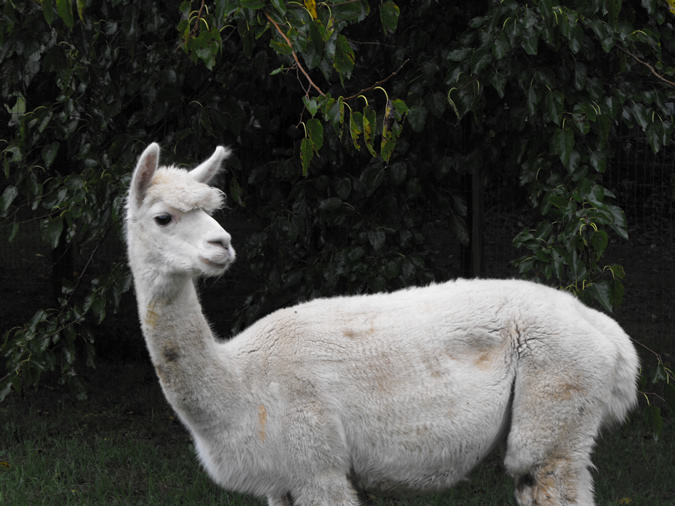 The origins of the Alpaca date very far back, stemming from the Camelid family, originating from North America. Camels, llamas, vicunas are amongst the families found in this group. When the camelid migrated to South America, the Inca bred them into the Alpaca, raising them in the higher altitudes of Peru, Chili and Ecuador, where their fine fur was used as fiber to create beautiful garments.

I was up for the morning challenge, seeing myself as a kind of George Plimpton, who was an American journalist and writer that placed himself in various roles (generally sports) in order to write about them.  By participating, I wanted to get a better idea of what it means to live and work on such a farm, even if it were for only a few hours of my day. 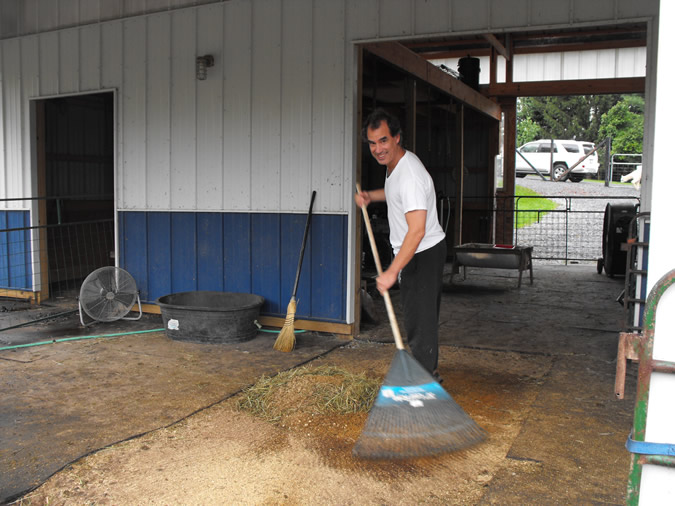 When I arrived Patricia introduced me, by name, to her pack of curious animals. I would never be able to remember them all, but there they stood gazing at me with as much interest as I gazed at them. With their fluffy coats of brown and white and scrunched up faces resembling ET, they define what it means to be cute. Although skittish, they allow you some room to get close and admire them. I reached out my hand several times but they pulled away. I tried to get closer, but I guess they needed to get to know me better. 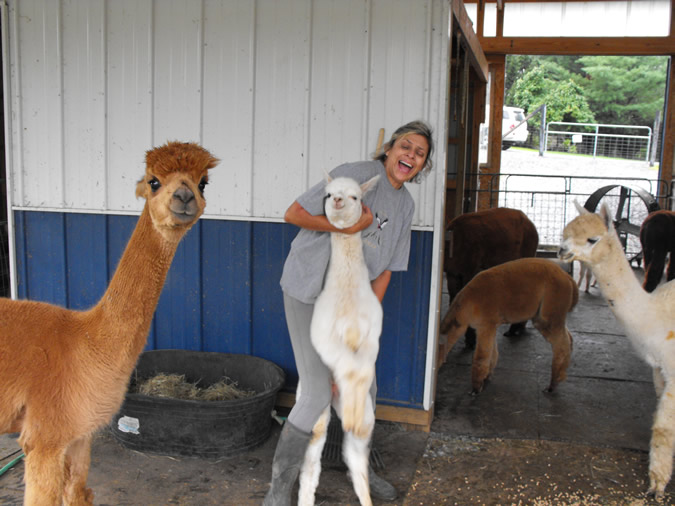 Soon after I arrived, several Alpacas slipped off through one of the gates that I accidentally left open. They are known to find trouble very quickly because they are smart and clever animals. They did not waste time grazing on the plush grass and leaves from their front yard, which fortunately was fenced in, keeping the animals off the road and close in sight. One Alpaca made his way into the vegetable garden, tiptoeing around the rows of unharvested vegetables. We tried to lure them back into the barn, but in vain. Patricia decided to let them be, knowing full well that they would come galloping back when she put out their grain and hay. 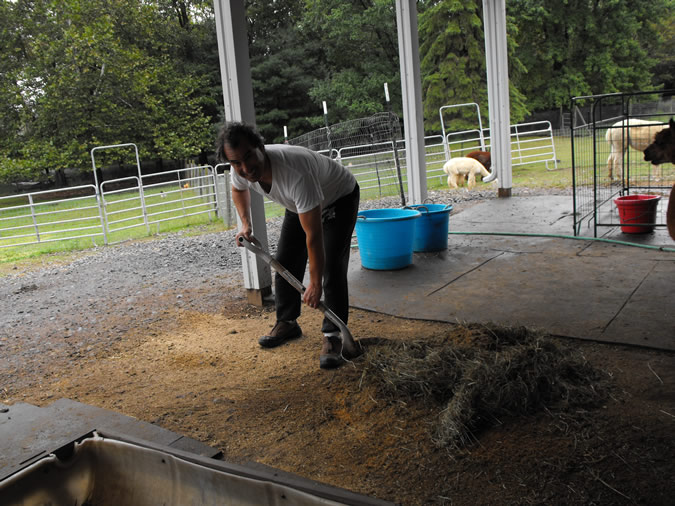 My first chore was soon at hand. One of the morning duties included picking up and disposing of Alpaca manure, tiny pellets in the form of deer skat. With 30 Alpacas on the farm, you can imagine what they leave behind. Taking shovel in hand, I scooped up the poop and placed it into a wheelbarrow, the dung mixed with other compost materials and used as fertilizer around the farm.  Patricia pointed to the area where her wayward alpacas were grazing, noting the richness of the land and other areas where green life abounded as result of the rich compost. I spent 45 minutes scooping poop, the shovel made heavier due to the added weight from the rain of a thunderstorm just before I arrived.

Working at this activity, I thought how different my life is – my typical mornings spent on the computer and mixing with facebook friends in virtual reality. In the early morning, it was nice to get out into the fresh air and lose myself amongst these animals, talk to Patricia and learn something about her Columbian culture, and of course learn more about the culture of the Alpaca. To be an Alpaca breeder, I would think one must be well acquainted with routine, for the life on the farm never stops, as the basic doings of all the animals are as regular as the rising and setting of the sun. 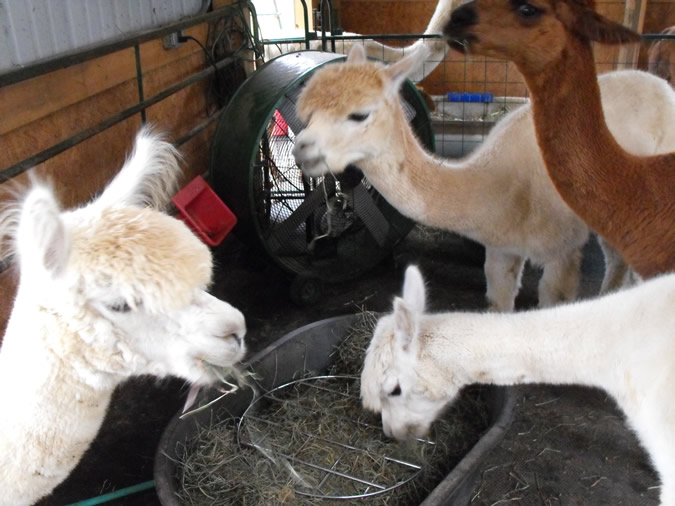 The variety of experiences encountered in the course of my morning was a refreshing treat, giving rise to a host of emotions. I was stunned at the vast number of flies the animals attract and amazed by the steep wall of hay they eat over the course of a year, costing a small fortune to feed. After hanging some gooey fly paper, I relished watching the flies collect and stick. After putting hay and grains in their trough and filling up their water buckets, I delighted in watching them eat and drink. I appreciated watching Patricia run her hand through their fur, checking for pests, and marvelled at her bravery for showing me a close-up of their teeth. And then there was the baby alpaca that had to be weighed, which Patricia carried in her arms, to a scale while its peeved mother spit and kicked, giving both of us a look of real scorn. Boy, I enjoyed watching that and so much more! Who says Alpacas aren’t like us humans? 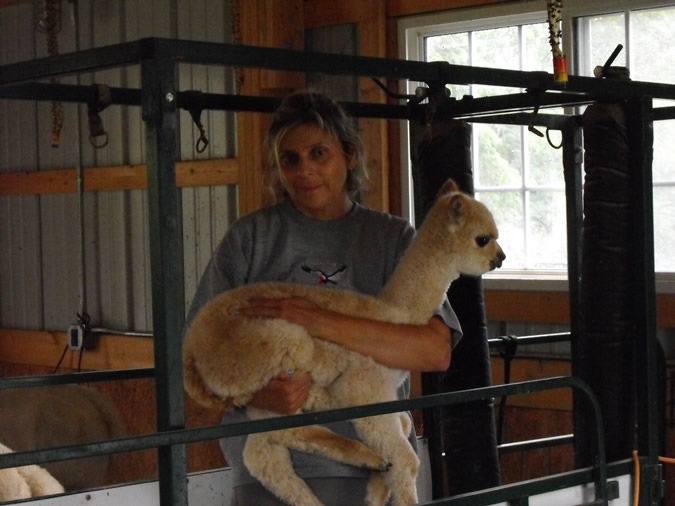 For Patricia, it may seem that Alpaca farming is a passion where the goal may be to breed and sell her animals, enter them in shows and win contests or keep them around as part of her extended family, which has clearly defined and shaped her life. But even more so, what drives her passion is to use the fine fibers of the Alpaca that she sheers once a year that are then processed into yarn to personally knit unique garments such as scarves, gloves, sweaters and hats for which she has received many blue ribbons. 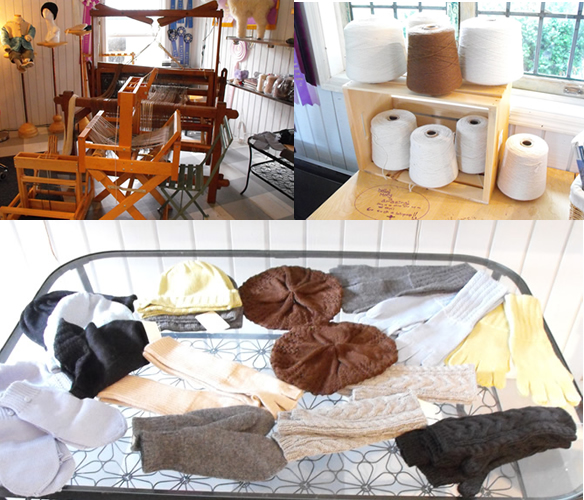 After we were done with the cleaning, Patricia brought me to her gift shop where she sells her clothing and other goods imported and made from the fleece of the Alpaca. They are beautiful, soft garments.  Who would not want a sweater made from such materials? 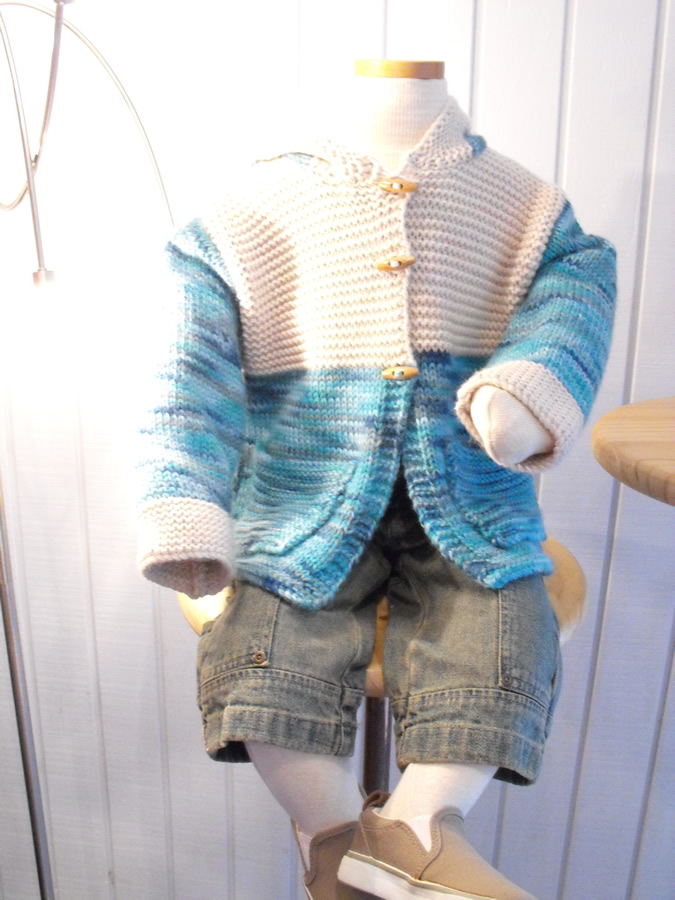 Once there, you may find yourself coming back over and over again.... 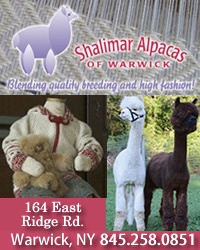 Located at 164 East Ridge Rd. in Warwick, NY, Shalimar Alpacas is open Saturday and Sunday from 11- 4 pm. There is a small fee of $5 per person if you would like to visit the farm and receive a tour, or $20 per group for up to six persons. Visit their website at www.shalimaralpacas.com for more information.