Restoration of Historic Home as Labor of Love

About 6 years ago I worked with Mr. Thomas Bartolomeo, a client who was looking for ideas on what to do with his historic home. His plan was to continue the restoration process and eventually sell the property.

Located in Ridgebury, one of eight hamlets (including Slate Hill) in the town of Wawayanda, the home was originally purchased in 1981 and was in a sad state. Bartolomeo recounts this fact in a personal letter he set aside for the next home owner. "When the real estate agent drove me to the house I was at first dismayed. There was so much wild growth on the front lawn I could hardly see the house."

You would never know it, looking at it today, thanks in a large part to Craig Morrison, the architect whom Bartolomeo hired to carry out the restoration. Over time, through gradual restoration, this neglected house became a warm and comfortable living space while its rich historic heritage was preserved. Bartolomeo writes, "it proved to be the most important decision I made in restoring the house--marking the time my personal education in Colonial American history began, and I have been learning ever since."

The original house was only a single room when first erected. According to Bartolomeo, "In the 17th century it would take two years to build a homestead, one year to clear the land and cut the wood and another year to build the house with ax and hand saw....The superstructure of my house is entirely made of ax-hewn oak and hemlock beams joined by mortise and tenon and large wood dowels. No nails, just wood on wood."

Since nearly every part of the house was constructed by hand, nothing was discarded but rather saved for another day. For example, the beautiful one inch thick wide-floor boards in the keeping room (dining area) were found in the attic.

The attic was an empty space, just a roof overhead and outside walls with no floor boards, ceiling or lighting. When I entered the space it was ridden with bats. Bartolomeo wanted me to come up with ideas on what to do with it. My suggestion was to turn it into a master bedroom suite with lots of closets and he did. It is now the largest room in the house with 11 foot high ceilings and three large walk-in closets. The master bath features a large shower and cast-iron enamel-claw foot soaking tub with elegance from the late Victorian and early 19th century periods. It is hard to believe it is the same space from 6 years ago.

The home itself is listed in the National Register of Historic Places, where you will find the nation’s official list of properties worthy of preservation. The National Registry recognizes the importance of these properties to the history of our country and provides them with a measure of protection." In this Registry, the home was listed as "The Dunning House." The local town authorities, however, whose records only go back to 1850, recorded the deed to Young who sold the house to Thomas Ellis. The house was later referred to as "The Ellis House.”

There are no existing municipal records indicating who built and owned the house when it was only a simple one room home but one of the restoration contractors told Bartolomeo that the house was constructed by Palatine (German) immigrants who immigrated to our shores in the mid-1600s and came in large numbers in 1709 with the offer of free land promised by England's Queen Anne. This contractor had worked on other Palatine houses for the National Parks Service and recognized the house's particular Palatine construction.

In the early 18th century a neo-classical revival of Greco-Roman architecture swept the county. These styles are evident in the high quality woodwork in the Center Hall and Federal parlor and was one of the key factors persuading Bartolomeo to buy the house. He writes, "The hall itself, however, had a presence about it, graceful and imposing, with a pilastered center arch of intricate wood carving. I remember just standing under the arch and saying to the agent, "I'll take it."

Architect Morrison, upon returning to the restored site, wrote Bartolomeo a letter, expressing his awe at the magnificent restoration.  "Stepping inside, one can only gasp. The entry hall, with its wide elliptical arch and carefully restored grained doors, not only matches the fine craftsmanship around the door, it is fully comparable to what one sees in the great mansions of 18th-century Virginia."

The "Gunston Hall" wall hanging in the hall is a copy of the original which hangs in the Virginia home of George Mason, one of the signers of the Declaration of Independence and friend of Thomas Jefferson. Waterhouse wall hangings manufactured a reproduction for this house. This alone put the house on the Federal Registry.

Adding to the awesome restoration of this room, the one-piece canvas Colonial floor-cloth in the hall was meticulously marbleized with 13 layers of paint. Bartolomeo writes, "It took them three months to complete. The wood floor under the floor-cloth is fully restored as are the other floors in the house.”

In early Colonial America the best floor covering available was a painted marbleized canvas floor-cloth as the one in the hall. Later when we ceased being colonies and became the United States, fast sailing clipper ships brought home hand-loomed oriental rugs such as the one in the Federal parlor. 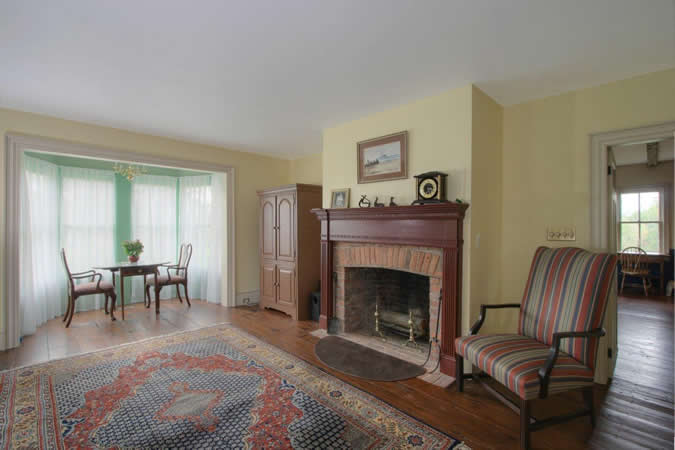 Across from the center hall is the Victorian parlor. The wood in this room is both massive and impressive in its full Roman Revival trim work. The crown molding, window columns and architrave, and baseboard offset the rich red oak flooring. Four massive two-over-two windows panes reach to the 8' 4" ceiling and allow the morning sun to stream through brightly. The wall fill, frieze and cornice wallpaper is a rich Persian Victorian design, screen printed by Bradbury & Bradbury Art Wallpapers. You'll feel like you are inside a jewel box in this room, which is centered by a ceiling medallion holding a reproduction Victorian chandelier with light shades of fading amber to a cream tone color.

The keeping room or ‘second kitchen’ pre-dates Federal period architecture as does the fireplace and built-in beehive oven which are originals. The old primary kitchen (or butchery) was attached to the house and is long since gone. As you enter the keeping room through the iron-strapped Dutch door you may feel as though you are entering another world. What you will see directly ahead in the room is a massive stone fireplace with a built-in beehive oven. Modern Thanksgiving turkeys have been cooked or rather broiled in the tin reflector-oven sitting in front of the burning logs in the fireplace. Yes, bread, too, has been baked in the stone beehive oven.

The house is as old as it looks, and yet it is as new as today which is what restoration is all about. “The love this owner bestowed on his home is featured throughout with historically accurate renditions of rooms, all the way down to the methods, materials, and craftsmanship that were used to bring them back to life. Amazing!” says David Sherfey of Keller Williams Realty, Goshen who is the Realtor of the house.

This home has been around for well over 200 years. A loving owner brought it back to life again with hopes of passing it on to a family. This home is a museum of American architectural style. Morrison writes, "For generations, this house has grown with its generations. Each has treasured it while adding the best of their own time. Together they have made it a veritable museum of architectural styles. Your loving care has continued the tradition in the finest possible way.

Bartolomeo, in expressing his own gratitude, said, “Our history and our traditions, the important things we take into the future, prepare us for life. Every day I have lived in "this ole house" I am reminded of that and hope that the new residents have their lives enriched in this house and appreciate the treasures it holds within its walls.

A fully restored historic home is a rare find and even with the modern conveniences this one speaks of another time and place brought to life through a labor of love.

Claudia Jacobs is a decorator, professional stager, columnist, mom, friend & not in that order. Living life with joy & owner of Claudia Jacobs Designs in Goshen, NY. Voted 2011 RESA Professional Stager of the Year in the Northeast. Visit www.claudiajacobsdesigns.com or call 845-294-8993. Send questions and photos to This email address is being protected from spambots. You need JavaScript enabled to view it.. Follow her on Facebook & Twitter.

David Sherfey, real estate writer & photographer, specializes in Internet
marketing of residential properties. An Associate Broker with Keller
Williams Realty in Goshen, David is also the incoming 2012 President of the
Warwick Historical Society. For more information about this home, along with primary sources referenced in the story and more photography, please go to the home's website, http://633RidgeburyRoad.com