Resurgence of Interest in Surrealism 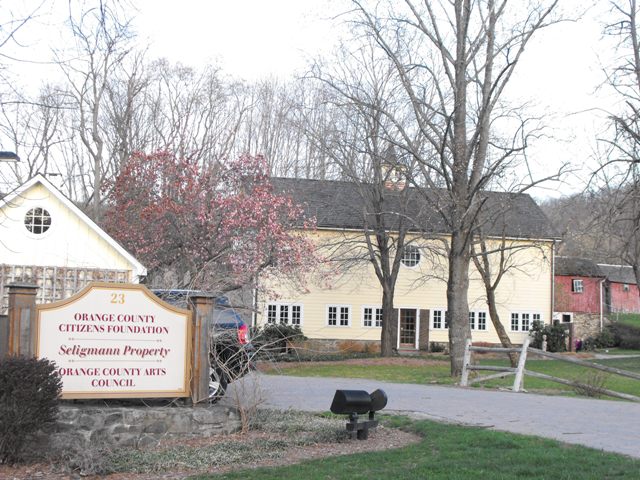 There’s been a resurgence of interest in surrealism in Orange County, NY, most notably and of late at The Seligmann Estate in Sugarloaf, NY.  On March 30th   an art exhibition, "A Homage to Kurt Seligmann," curated by Jonathan Talbot and Jessica Lawrence, was one in a series of events over the last year bringing to light some of this exciting activity. The show was packed with enthusiastic viewers and showcased local artists working in the medium of collage to pay homage to the life of Seligmann.  Although Seligmann himself was not a collagist, surrealism has been important to the development of collage, as in the case of Max Ernst, one of the primary pioneers of the Dada movement and Surrealism. 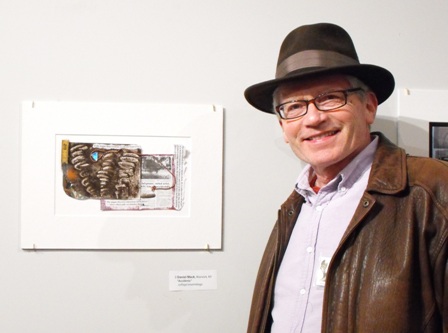 Artist Daniel Mack, who has been a key coordinator in promoting Surrealism at the Seligmann and who has produced a blog on the subject, displayed a piece of his own called   “Accidents,” which  explores the irony between Seligmann’s death as accidental (as was pronounced by the media) against Seligmann’s own belief that there are no accidents. 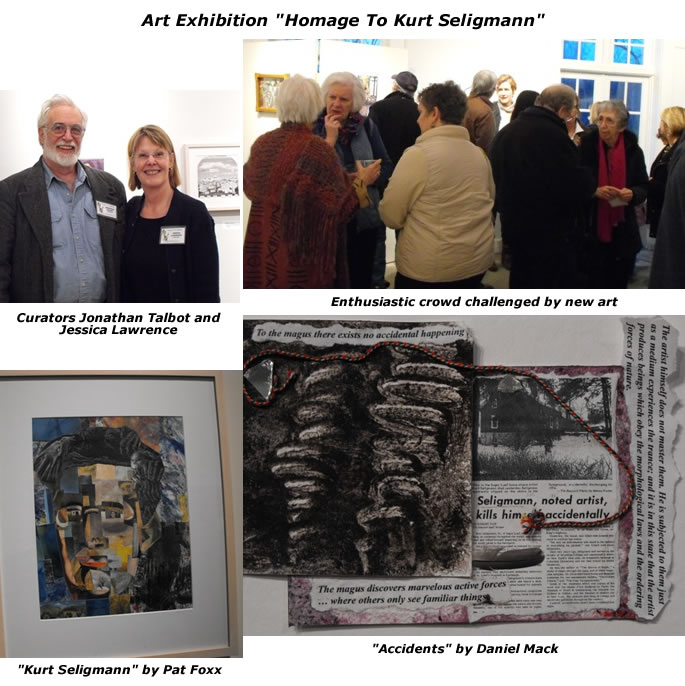 Seligmann is now a designated center for Surrealism and other avant-garde activities. In December, the Seligmann held a Surreal Cabaret showcasing avant-garde performance with another planned for May 25. Plans have also been made for a Surrealist festival and projects such as experimental film nights, lectures, poetry, cabaret, a Surrealist Garden and cultural art events. Internationally recognized artist Robert Whitman had a performance installation piece on exhibition and the center has viewed classic experimental films such as “Pull My Daisy,” written by Jack Kerouac and Allan Ginsberg and filmed by Alfred Leslie, "The Last Clean Shirt" by Frank O'Hara and  "Fat Feet" by Mimi Gross and Red Grooms. Poet and performance artist Janet Hamill said, "All films were experimental and all of the artists involved in the production - directors, poets, painters, composers - were of the NY avante-garde scene, which was highly influenced by Surrealism." 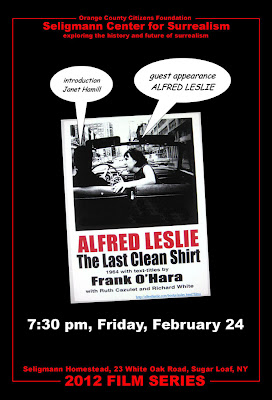 The center is named after Kurt Seligmann, who in his time was an important Surrealist artist who maintained a home and studio in Sugar Loaf. His country place was visited by many other major artists of the European avant-garde like Duchamp, Man Ray, Tanguy, Ernst, Calder, Charles Henri Ford and Meyer Shapiro. Some of these artists also made prints at the Seligmann studio. When Seligmann’s widow Arlette died, she left the building and grounds to be used for the good of the county. In addition to the Surrealism Committee, the estate currently hosts the Orange County Citizen’s Foundation and the Orange County Arts Council. 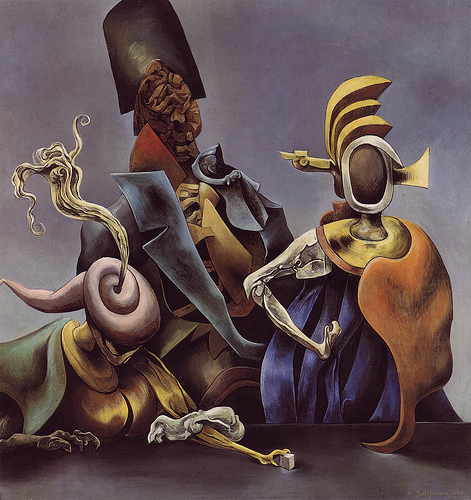 So what exactly is Surrealism? By textbook definition, it is a style of art and literature developed principally in the 20th century, stressing the subconscious or non-rational significance of imagery arrived at by automatism or the exploitation of chance effects, unexpected juxtapositions, and dreams.  Poet, writer and teacher William Seaton, who presented a program of his translations from German Dada poets as well as a general account of the Dada movement (which preceded Surrealism in the European avant-garde) explained: “Surrealism relates to something deeper and more real than everyday reality.  Dreams, automatic writing – all art seeking some source of information beyond the rational." Hamill added, "the Surrealists felt that the unconscious, or the sur-real (that which was above the real) revealed the truest picture of human nature. Mack offered another perspective, stating, "Surrealism is just a name given to a literary, then visual response to the shocking poverty of a military or capitalist approach to strife. The Surrealists were passionate about urging some encounter with the unconscious as a component in a balanced life.”

These art concepts evolved out of the Modernistic movement, starting with the art of Cezanne and his rejection of realism in favor of expressionism and the imagination. This led directly to the development of the avant-garde in Europe in the inter-war years, characterized by the advent of the Dada movement which started in Zurich Switzerland in 1916 at the Cabaret Voltaire under the direction of Hugo Ball and artists like Tristan Tzara.  Surrealism took root in the 20’s with Breton and Cubism with Picasso and Braque, and its development in America occurred when European artists immigrated to the U.S. during WW 2.  Seligmann was one of those artists.

Interest in Surrealism has extended beyond the Seligmann Estate. In Warwick, at the College of Poetry, Seaton organized numerous literary events, bringing in poets like Bob Holman, Janine Pommy Vega, Ed Harris, Harris Schiff, Joel Lewis and Janet Hamill. Hamill taught a course in Surrealism poetry and offered a poem of her own to illustrate Surrealism at work in writing. 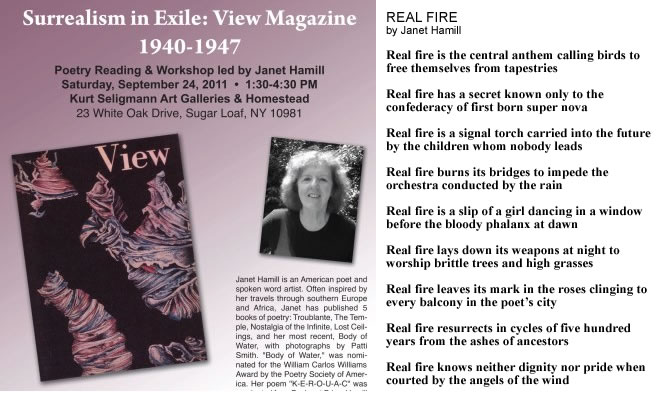 "My poem," she states, "like the films, tries to break the rules of logic, abandoning logic and exposing the subconscious through strong juxtaposition of imagery, which is the primary goal of surrealism."

At the former Bookstore/Art Gallery Utopian Direction at 7 West St. in Warwick, proprietor and accomplished multi-media artist James Antonie, with his installations and Micro Gallery displays, continued to inform the public of the value of surrealism. Antonie states about his own work: "It's about the juxtaposition between the imagination and the consensus reality of what's real. Art has a way of showing another vision of reality thus changing the way people look at the world." 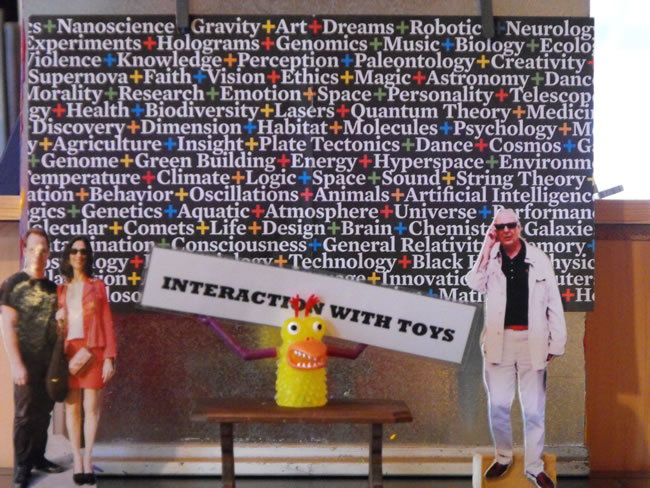 At Utopian Direction, Antonie also featured the work of Jan Sawka, international painter, printmaker and stage designer for the Grateful Dead, Beat Keerl, painter and photographer who was also the manager of the Andre Emmerich Gallery on 57th  St.  NYC, and  Michael Fabian, innovative contemporary painter and musician. The photography of Beat poets by Monica Antonie and the One More Beat event with 100,000 Poets for Change featuring the readings of Harris Schiff were just a handful of activities at Utopian Direction where one sees the influence of Surrealism on individual artists.

Perhaps one important result of the interest in Surrealism is that it has promoted interactions and connections with the creative community, which has developed into Artist Salons going on in individual homes, studios in Orange County, and the Seligmann itself, when on the last Thursday of each month, one can take part in The Artist Salon. The participants in these Salons, like they did in the past, all have their circles of  friendships and influences that they bring to the table for an interesting and inspiring discourse. The intermingling of these circles of information and interconnections become an inspiration for all those involved.

Today, fine art has mixed references to popular culture with the incessant cross fertilization between 20th century art and less exalted forms of visual and audio culture which has long been known, like Picasso and Braque’s introduction of the newsprint of Parisian popular press into synthetic cubist collages; Roy Lightenstein’s careful clippings and adjusting of ordinary comic books to form his pop art paintings; Andy Warhol’s soup cans and appropriated images of the popular culture in which advertising borrows from fine art and fine art borrows from advertising; the influence of Marcel Duchamp and the readymades which brought about conceptual art;  the works of Rauschenberg and Jasper Johns, in the assemblage processes of found materials.

Performance art, video art installation, earth art outside the art establishment spaces of galleries, and computer art are all evolving with a vast array of local and international artists experimenting and synthesizing all styles and genres. And for all of this, we can acknowledge the importance of the Surrealist contribution to modern and post modern art and culture.