Warwick artists Janet and Louis Fatta determined early on that they would pursue their passion parallel to their busy family life. Janet, a painter, and Louis, a metal sculptor, met at Pratt Institute as students, married, became parents, and with clear vision and a few faithful relatives and friends built a classic pole barn on their property to separate the crayons from the oils and the clothing iron from the anvil. 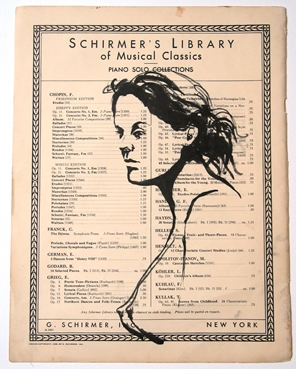 Janet works in the large loft space, where abundant northern light enters and falls on her canvases. The products of her skill and expertise are everywhere. When not giving lessons, she works in alternating mediums according to her mood on any given day.  Subjects range from perfectly rendered nude charcoals to candy colored oil abstracts (inspired by a trip to the Museum of Natural History’s Cosmic Collision Space Show). Annual Christmas portraits of the extended family-- one all in shades of blue, a tribute to her appreciation of Picasso’s Blue Period, depict the large extended family’s poignant idiosyncrasies as they gather around the holiday table.

In the middle of the studio on a high stool, sits a lemon on a simply patterned plate. Its brilliant still-life likeness mirrors back from a nearby easel. When asked, “Why a lemon?” she recalls the bagful that she bought but couldn’t use up. Then with a nod to creative license she shrugs,  “Because it was there. And I like lemons.”  Janet’s talent is at once bold, yet sweetly unsung. 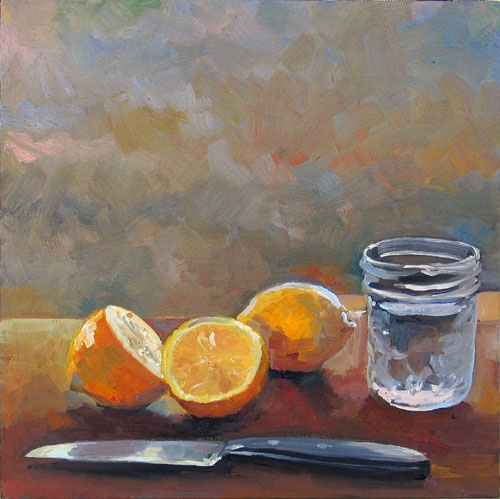 In addition to the routine interruptions these two dedicated artists face as parents, they admit that it is a challenge to contend with each other’s coveted time in the studio. They must constantly defer to fairness as one takes up house duty while the other grabs a block of time in the studio. They smile in agreement about the tension, but there is no complaining. They are obviously at peace with their choices.

Louis is an art teacher in Rockland County by day, and an actively working sculptor at every other available opportunity. The barn’s ground level is his domain. It sports its original hard packed dirt floor and in the center, tool of his trade, a welding machine. The doors face the woods and not fifty feet out, a steep ravine drops down to a noisy little brook. Many of his pieces are scattered around outside, seemingly by random among overgrown grasses, weeds and trees. Pitted by rust and weather, they appear at home: vestiges of urban energy juxtaposed with shapes of nature, like omens for seeing eyes. As Fatta explains his artistic objectives it becomes clear that the apparent randomness is intended--  implying man’s cavalier footprint on a vulnerable earth. 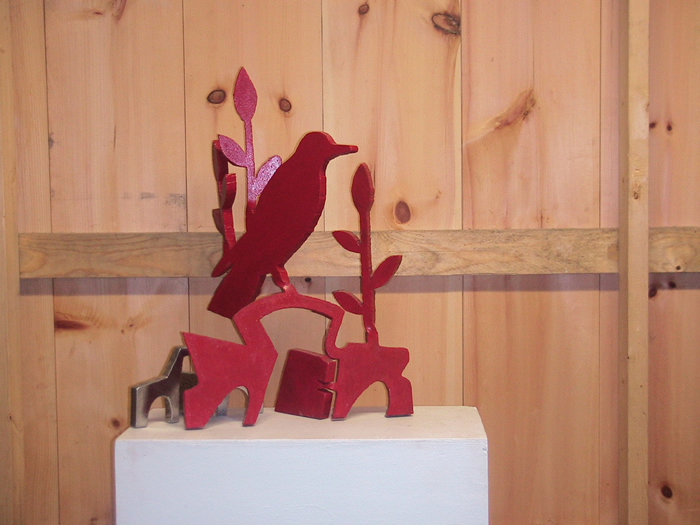 Fatta chooses a few profoundly representative shapes including the automobile, the raven and the ant, stacked in varied combination, as totems to humanity’s heedless stamp and nature’s relentless capacity to compensate. Cut in minimal silhouette, their relationships become intuitively apparent. The automobile, catapult to the industrial revolution. The raven, scavenger/sentinel. The ant, carrion consumer. Wrought in welded steel they stand, mute tattletales on civilization’s successes and its sins.

One of Fatta’s major influences is Romanian sculptor Constantin Bancusi, whose non-literal representations reflect “… not the outer form but the idea, the essence of things…”  and the impossibility “for anyone to express anything essentially real by imitating its exterior surface.” This ideology shows up for instance, in the semi circle spaces where wheels would fit under cuts that form the automobile bumpers. No motion here. Just the mind of motion. Or again, in the relatively realistic ant set on small garage door wheels. Ants don’t skate. But they don’t stop either. Like commuters in cars.

As recurring imagery is manipulated, new images are introduced, such as a  rectangular skyscraper among tall wavy weeds. And new messages of growth, decay, recovery and resolution materialize.This layering and reworking is a little like Janet and Louis and their kids and their dog. Only their skyscraper looks like a pole barn. Their car is an SUV. And you might find a few ants among the cookie crumbs on the counter. All a cheerful totem to the grounded artist’s life.

ReeAnne Davies is a freelance writer, having worked in educational publishing for many years, in both editorial and administrative positions. A mother of five, she can be found reading contemporary literature, hiking the Appalachian Trail, studying ancient scripture or pondering the direction of American culture and politics. ReeAnne can be reached via email at This email address is being protected from spambots. You need JavaScript enabled to view it..