Love to Travel, Hate to Pack 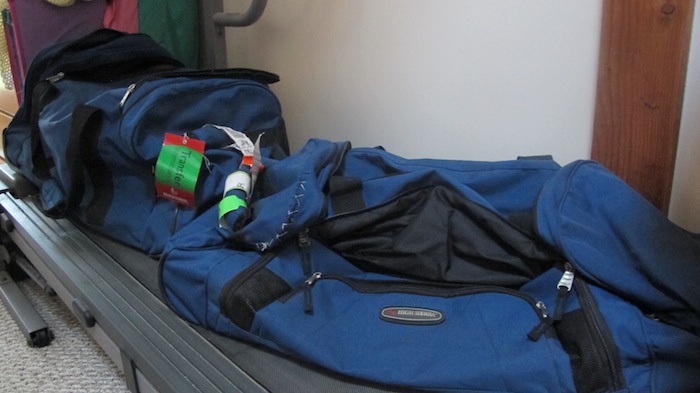 The bright blue duffel bags had taken up residence in the corner of the bedroom, on the treadmill.  Geoffrey’s was getting pleasantly plump.  Mine wasn’t.  It was hard to ignore, much as I tried.  It accused me daily.

“Carole, what are you waiting for,” it seemed to say. “Tick-tock, tick-tock. You’re leaving in a week.”

Sure, I had thrown in some books and music, underwear and socks, pajamas and robe, aspirins and Pepto-Bismol.  But that was mostly to pretend I was actually making packing-decisions.

“This one’s not easy,” I whined in its general direction.  “Two climates, Ghana and Paris.  Four months.  Work and play. See what I mean?”

The truth is, though, that I always obsess about packing, even for a four-day beach vacation.  You’d think after all the traveling I’ve done, it would be a breeze.  It’s not.  For that matter, you’d think after all the flying I’ve done, I’d have given up my white-knuckle-armrest-grip during take-off, landing, and turbulence.  I haven’t.  It’s irrational: I’ve never not-packed something so crucial and so irreplaceable that it was a problem.  And I’ve never been in a plane that crashed.  But still, I don’t like to pack and I don’t like to fly.