From Warwick To Syria: Notes from Sam Kimball 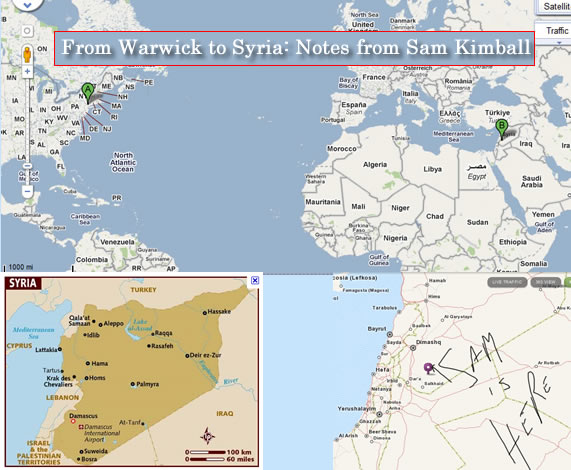 I trotted down the old stone steps, the vegetable carts piled high with bright red tomatoes and the shoe repair shops to my back, and the big ugly highway splitting this part of the Old City in two, and the pink setting sun, ahead. "Ughhh, you have no idea what you're doing...." I grumbled, looking on with frustration at the procession of cars, vans, and taxis roaring up and down the highway, Syrian flags and huge posters with the stern and (dopey-looking, frankly) face of the president, and handfuls of young cheering Syrian men, hanging out the windows. They leaned on the horns, honking with the fury one might hear after a win in the World Cup. It went on like that until late in the chilly night, echoing around the paint-flaked walls.

I winced at the mad ignorance of the shebēb (“young guys”) waving Syrian flags, as if I was being cut with a bit of glass, who come out to say… what? That, “Goddamn, we’re so proud of our country for its stability and security (albeit muffling & repressive). And goodness, we’re so taken by that pride for our waTn (“motherland”) that we just had to come out into the gloriously dirty streets of our capital to share it. It’s just a coincidence that our outpouring of love comes at the moment rebellion is appearing in the country.” Is that the message? Or, is it, as my housemate said to me one night when I came home from work, weary from the horns of regime-supporting shebēb blaring on the highway beside me, that they’re just excited at the disturbances in the daily order of things and are coming out with the flags and placards as they might in a soccer match between Manchester United and Barcelona?

The question is worth asking: is this support genuine, or fabricated? And what does genuine support really mean, in this case? The question’s a fly buzzing in my skull for the rest of the five-minute walk under the highway and through the tattered Ottoman-era buildings all piled on top of one another, to my house.

As I watch intermittent reports on Al Jazeera on TV the next morning, switching between righteousness-ripe pro-reform protests in cities like Homs and Hama and Dar’a, and video clips of big crowds of flag-waving “We Love Asad” demonstrators, the question comes up again.
I think back to the party we had in our house last week, where I stood in the back nook of our florescent-lit kitchen, surrounded by a motley assortment of European college kids, where I had my first meaningful political conversion in Syria about Syrian politics. My friend, Firas, brought up the point that a lot of the seeming support for the ruling regime here comes from people’s assumption that any kind of disturbance in the political order threatens the thing they’ve been “trained”to value most: stability. Or, at least that’s what it’s called.

What it means is a no-questions-asked one party government, supported by a deep network of secret police with nearly unlimited power due to special “State of Emergency” laws that have been in effect since 1963, which, I believe, is when the Baath party assumed power in Syria. Yet, because of the super-nationalistic rhetoric spewed in schools, something I can confirm from my days as a university student here, as well as all other major institutions, and no discourse in the public sphere to counter it, people begin to fear and, even worse, resent those who dare ask for greater freedom and opportunity in their country. That was me and Firas’ combined analysis of the state of regime support. Where we differ, though, is when Firas says, “But Bashar is not a bad guy. Actually, I kind of like him.” Sure, I don’t think he’s got evil coursing through his veins by any measure, but he’s the face of the scummy cabal that runs this place, and it’s his responsibility to avoid the intimidation or killing of protesters if he’s not crazy about shooting at his own people. So I spare him no critique.

Something that entered the margins of the conversation, rolling off the tongue of a pretty Tunisian-German girl in front of me, who lives with a Christian Syrian family in the Old City, is the enduring political and social conservativism of the Syrian Christians. She talked about how her family basically interviews her about each person she’s going to bring to the house to find out whether they’re Christian or not. I believe she also mentioned that they were very anxious about any change in the regime that could occur in Syria, fearing it might usher in a government that oppresses them, the minority. I think this is a fear that’s been cultivated since the days of the French protectorate in Syria (1919ish-1946), the French having done a swell job of dividing-and-ruling along religious lines, which is still the cause of violence in Lebanon. It may have roots further back into Ottoman times, but I don’t know much about that. Just an informed guess.

But this question of genuine support is partly answered by a little anecdote another friend shines on me when I step in the door one day. He says that, regarding the recent pro-regime demonstrations, a woman in his class at the university here in Damascus has a Syrian boyfriend. That boyfriend of hers was recently summoned to university on a Friday (normally the first day of the weekend around these parts), being told that there was an extremely important exam that day that he had to take or he would fail his course. Upon arriving at the university, he found it closed, with the doors locked. Yet, he and a number of others were collected (by who, it is not clear) and tossed into a bus that took them to a nearby pro-regime demonstration. They were sternly commanded to go out and participate in the Syrian flag fest. If that anecdote is at all typical of the current situation, we see that the apparent love of esh sha3b es sūri (“the Syrian people”) for its government is just a little inflated.

And the process of political awakening that is going on among former regime supporters, or at least those who accepted it, is an interesting one. Like my friend Fehemi, for example, whose face began to crumple with disappointment, and hints of anger crossed his brow, during our language exchange the other night. I always took him for a socially conservative guy, and this attitude popped with strength during one language exchange a couple weeks back. With the first wave of violent repression of the protests in Dar’a, he had told me that he just wished the protesters would calm down, and that he was worried that because of the clan system widespread down in Dar’a, clans would come out and take revenge on those who killed their kinsmen.

His disappointment with the ruling regime only came as a disappointment with the regime’s stupidity for violently repressing the protests, not because it was unjust and despicable to do so, but because it might spark further protests in other parts of Syria. Now, during our conversation in English, he let me know that his support built from fear was disappearing. He said “I feel like I can’t trust the President any more. I used to like him.” I pressed him a little on that last comment, and he said “I only ‘liked’ him because I knew there could be worse people in his place, like his Father Hafiz al Asad. But now, because of his lies, like saying he would remove the Emergency Laws, and because he kills his own people, I am disappointed.” I asked him if he felt angry. “Yes, I am angry. They made me believe something, but now I see that they, how do you say?” “Tricked?” I said. “Yes, they tricked me.”

About my Trip to Syria

I came to Damascus, Syria first from July to December 2010 in order to study Modern Standard Arabic at the University of Damascus. After two months of study there, I moved on to private lessons in Syrian Colloquial Arabic, the spoken language if the region, which I focused on for the rest of my time in Syria. During those five months I traveled to various places within Syria, as well as Lebanon, Turkey, and Iraqi Kurdistan. 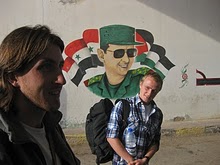 I returned in early March of this year to take a short-term job offer I had agreed to during my last stint in Syria. I began working part time at a language institute in Duma, just outside of Damascus proper. I worked alongside Arab teachers as a pronunciation and idiom teacher, focusing on developing a fluency in spoken English with my diverse body of students, many of whom were strong in writing and grammar, but lacked experience in conversation.

However, because of the protests against the Syrian autocracy that have multiplied in Syria in recent weeks, with Duma witnessing some of the most violent repression of protests, my lessons have been put on hold until further notice. I will be meeting with the Institute's administrator later today, though, to discuss the possibility of resuming lessons before I leave Syria, on May 3rd. At the moment, I am preparing to take a part time volunteer English teacher position with the Danish Refuge Council, working with Somalian refugees in Damascus. I will also begin private English lessons with a local client in a few days. We'll see what the next few weeks bring! 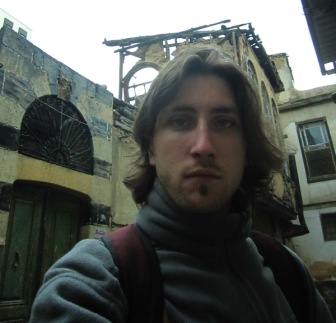 To follow Sam's blog, go to Notes from Sam Kimball.