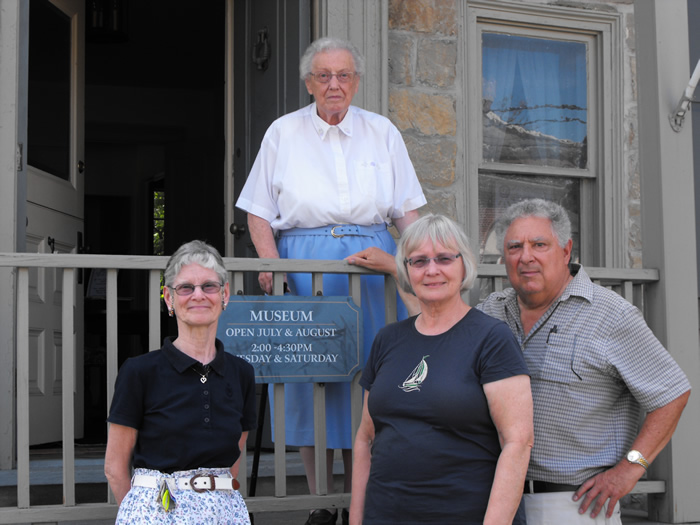 How much do you know about your local history? I confess that I don’t know much about mine. Or at least I didn’t until this summer, when my knowledge grew another inch and my interest a foot longer. At the urging of Maureen Cuddeback, who is the coordinator of the docents at the Warwick Historical Society, I was invited to take several guided tours. I chose to stick with one building – Baird’s Tavern. 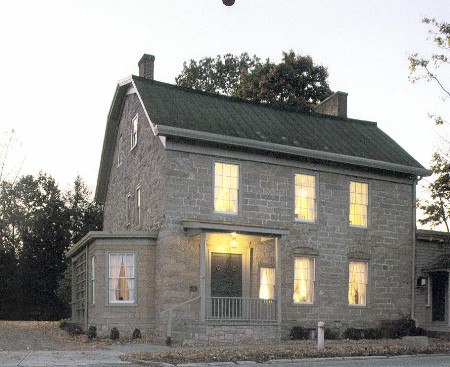 If it weren’t for these guided tours that are currently being offered twice a week during the summer months, on Tuesday and Saturday, from 2:00 – 4:30 p.m., I might still be in the dark. Not just because the tours have been illuminating, but because of the questions I would later pursue on my own, leading me to Warwick’s history on the Albert Wisner Library website, several books on the History of Warwick, The Historical Society Archives, and numerous searches on Google.

When Tony Houston, one of the docents who gave me a tour of Baird’s, introduced me to a candle in the tavern room, my curiosity was piqued. He said, “There was an entire industry built around this candle. You had the pedestals, the mirrors, trimmers, snuffers, candle boxes, etc. For many years this was the case. When the electric light came along, however, everything related to the candle went out the window.”  Can you imagine the impact such change would have on society? The fear that it might have brought on, that your way of life, the industry on which you depended, was no longer there to serve your livelihood?

Today we see changes in our own ways of life, one business model supplanting another or businesses transforming themselves in order to survive. Farms offer wi-fi, bring in wine-bars, sell non-farm related items, entice you with organic coffee, make gourmet breakfasts, provide interesting events – or else they too become extinct.  It’s not just enough to sell milk, eggs and a few farm vegetables these days. Studying history reminds us that change is ever constant.

Touring Baird’s Tavern with Executive Curator, Michael Bertolini, he explained. “From New York to Newburgh, Warwick made for a great overnight – if you were riding your own horse you could turn it in and get a fresh horse.” That helped me to understand why Baird’s was a thriving scene during the Revolutionary War era. It was an important strategic point of interest, even bringing George Washington to the Tavern in 1782, which is a documented fact and the reason for the yearly celebration given by the Society. 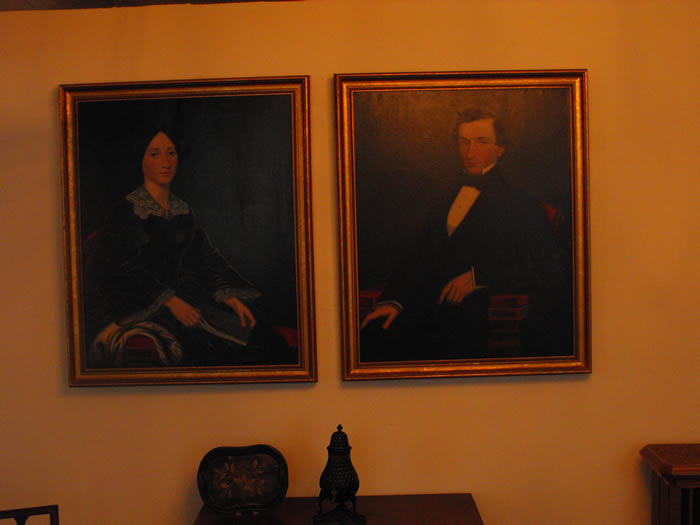 Taking me to the second floor of Baird’s, Michael went over various uses of the space and pieces from their current exhibition, Warwick's Gentry: The Way They Lived, 1740 – 1810, a display of antique furniture, portraits, and costumes. Talking to the docents, I learned a little more about the prominent individuals of Warwick’s community. Candy said, “Here we have the Welling Family, there’s Justice Dill, here are the Wheelers and that’s Samuel Ketchum. Asariah Ketchum was the architect of the Old Baptist Church and the Ketchum House.”

It was just enough information that would again spur my interest in search of more biographical detail, prompted by a series of questions that I continually ask myself: Who were these people, what were their aspirations, how did they feel about their lives, what tragedies befell them, what gave them happiness? 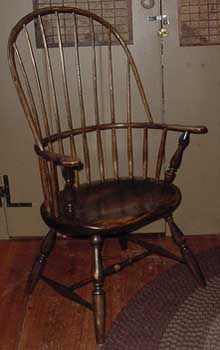 When touring the attic with Michael, I was shown a wide collection of chairs that dated back to the 1750s. I said, “these chairs must be worth some money, have you ever thought about having the Antiques Road Show appraise them?”  Michael, who has spent his life in the antique business, responded that depending on the market, the chairs could fetch a pretty penny. Yet what did I know about chairs except that I liked to sit on them and would probably sell my chair if I was offered a good price? Not much, really, until Michael got me more interested.

“The chairs were scaled to the person who had them made. This was General Hathorn’s chair – feel how lovely this feels,” as he took my hand and guided it over the contours. “You were measured from the knee to the floor to see what depth you needed. These chairs were custom made.” Then pointing out a Windsor Chair, he explained its practical utility: “it was an all purpose chair; it could be used indoors and outdoors, either in a formal room or bedroom; it’s light and comfortable and could be easily moved. You could add a cape or blanket on the back of the chair to block the draft.”

When Tony brought me into the attic, he brought my attention to the architecture. “Everything here is the way it was built in 1766 – the floorboards, the stone, the post, which go up and down, the pegs (no nails). It was put together by post and beam construction and held together with pegs. The roof, stone and floor – it’s all original.”

In 1766, fueled by unjust taxes, the rift between the American Colonies and Britain was growing, bringing us closer to the Revolutionary War. And that was the year Baird’s Tavern was born. I suddenly imagined the leaders of the time, curious as to what Ben Franklin was up to in 1766. I learned one thing he was doing: being examined before the House of Commons, providing his response against the Stamp Act. He was 60 years old. Thomas Jefferson was in the midst of pursuing a career in law and would start construction on Monticello two years later. George Washington was building up his estate at Mt.Vernon after years of playing the role of soldier.

When putting history in context, I found my interest growing in our local history. Historic artifacts and rooms, such as I viewed, were brought to life, transporting me backwards, exercising my imagination to impose my own reading on history and to write it from my own point of view.

Of course it doesn’t hurt to discover that your docent has family relations dating back to the time period. Tony’s direct descendants were responsible for the construction of the Tavern I was standing in. He explained, “Joseph Houston, who came from Scotland and preached in Virginia, came to Montgomery in 1739. His son Andrew was the first Houston who married a Wisner and John Wood Houston married a Baird. Julia Baird was one of my great grandmothers.” Then came another  insight. “We didn’t invent locomotion or transit. It’s not just us who go to Maine or Florida; they went out west three or four generations ago, despite all of the difficulties of getting around.” 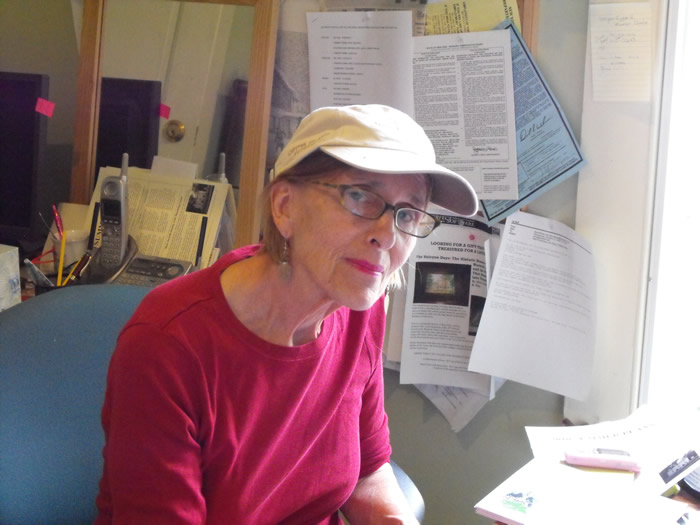 I enjoyed each of the tours I took at Baird’s Tavern, especially meeting all the special people responsible for making it happen. The Historical Society, under Director Jo Hull and President, Pat McConnell, have worked hard to make history a living, breathing subject, offering concerts, picnics, art appraisals, play readings and all kinds of other activities that engage people of all ages to get interested in history.

This year the Historical Society celebrates the bi-centennial of three buildings which have stood the test of time: the 1810 House, The Old Baptist Church and the Ketchum House. Their big fundraising event, The Under the Tent Party, takes place on August 28th, from 6 to 9 p.m., and serves to promote the preservation and restoration of these properties so that we can continue to enjoy, appreciate, and learn from them. 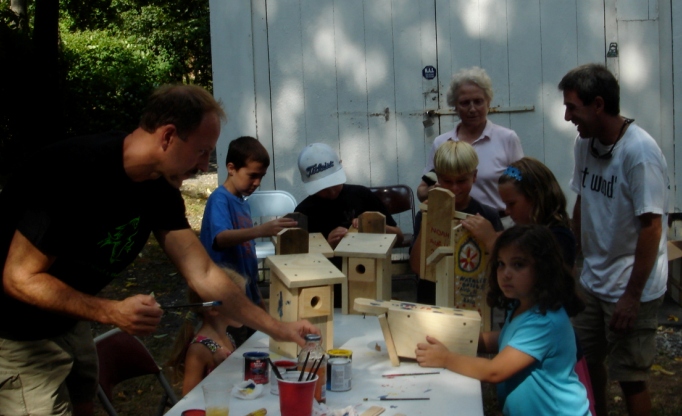