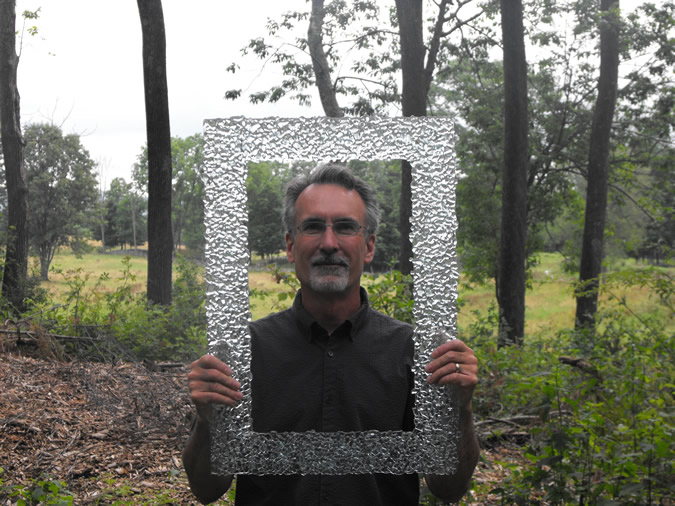 As the sound of a diesel engine starts up the opening video of a kickstarter project called Turning Trash into Treasure, we are introduced to glass artist Gary Genetti who is showing us a novel technology drawing on recycled glass. He shares with us his vision for a more sustainable future: turning junked glass into functional household objects like bowls of various sizes, mirrors, clocks, lighting fixtures and whatever else your imagination can think up, design, and create. Even jewelry, which his wife, Mena Messina, is starting to do with their two daughters.

The idea of a resource like glass that can be sourced locally and repurposed almost anywhere in the world is a big part of the vision. Genetti calls it “Activist Art. Art that changes the world. Art  that can be done on a small scale that grows and expands.”

He adds, “It’s also about sustaining myself and my family and to be able to do it in a way that is a model for others. It’s a project with a low tech approach resulting in a beautiful object. Hence the slogan turning trash into treasure.”

Did you know there was an estimated 12-15 million tons of the type of glass found in commercial buildings, automobiles, and residences that ends up in landfills each year? “As a glassmaker, I knew that there was so much glass that is wasted. “Tempered glass cannot be cut or reconfigured in any way. It can only be shattered and re- melted.” says Genetti.

With the help of his family, he begins his project by carrying the tempered glass off premises from junkyards or receiving donations from local residents. In his studio, we see the process of how recycled glass is turned into objects. He calls it ‘upcycling’ - turning a waste material into a valuable object.

At the studio the glass is broken into tiny pieces and then collected into a bucket, washed and dried.  Then it is plated on a circular window glass which has been edged, placed into a kiln and baked at temperatures above 1400 Farenheit. “One part of the sustainability side of the project is that we use 20% wind energy to heat the kiln.”

It’s a seemingly simple process, like baking cookies. The end result:  A unique set of functional objects. Like many good ideas, however, the path to simplicity is strewn in a maze of twists and turns bringing together Genetti’s years of ingenuity as a glass artist fused with his consciousness about living in and creating a more sustainable planet, together with the challenge of presenting a glass enterprise that has commercial possibilities.

In the quest to commercialize, this simple act becomes more complicated.

“The problem with glass is that it’s a cheap resource and it’s not an environmental hazard,” says Genetti. So the first issue we have to confront is the low demand for an easy and cheap resource. It begs the question: Is it worth recycling?

Another obstacle that hampers Genetti is the fact that it has never been done commercially. It’s considered undoable because there is no infrastructure to receive the materials from landfills and junkyards except to go out and collect it oneself.

So if there was an assignment to do a large scale project, like to fulfill an order to supply the lighting fixtures for the newest sky scraper or hotel that is being erected, it would be hard to project the accessibility of the quantity of recycled glass needed to be collected and processed..

Another complication is whittling down all of the potential objects of creation that lend themselves to more commercial appeal. Genetti’s background has been as an artist, not an industrial designer focused on producing functional objects that have mass appeal.

Finally, finding the inroads for where the products will sell creates another set of challenges. Genetti, who has a background in working trade and craft shows, has had very little experience selling ideas to department stores and home supply chains, where it might be essential to get these products to market on a larger scale.

Despite the hurdles, Genetti marches on, recognizing the steep challenges ahead of him. “My vision for it is to create a business model that would employ returning veterans. The project would be a metaphor for a shattered life fused together. If a lot of people fed into the idea and it blossomed into a bigger possibility, why couldn’t this scenario materialize?”

On the day I visited Genetti, he was getting ready to put another batch of glass into his kiln. “This glass came from a ceramics maker. She and her husband have closed their business and are planning on moving out of the area. They gave me an old shower door.” 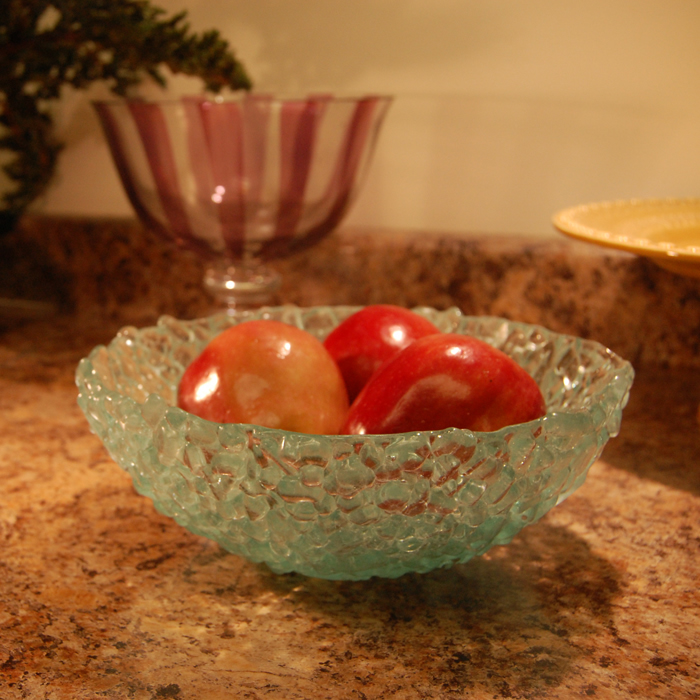 Recently Genetti has been commissioned to do several pieces, as he has cultivated a good client list over the years who are still interested in his work.  Although it hasn’t always been easy, he admits that he has been fortunate to do what he has always loved. “I’ve been doing what I love and have been lucky enough to make a living at it. When has there been a time when it was easy for an artist?”

“We’ll see how this project goes. The next trade show is the buyer’s market in Philadelphia. That will be the proof of whether this is going to fly or not. If it doesn’t, we move on. There is too much investment in time. The show is branding itself as American made and crafted products with a broad based market.”

As I was preparing to leave, Genetti handed me a beautiful bowl made from this recycled glass. “They make great holiday gifts,” says Genetti. We are having a holiday sale. Come on over and invite your friends.” 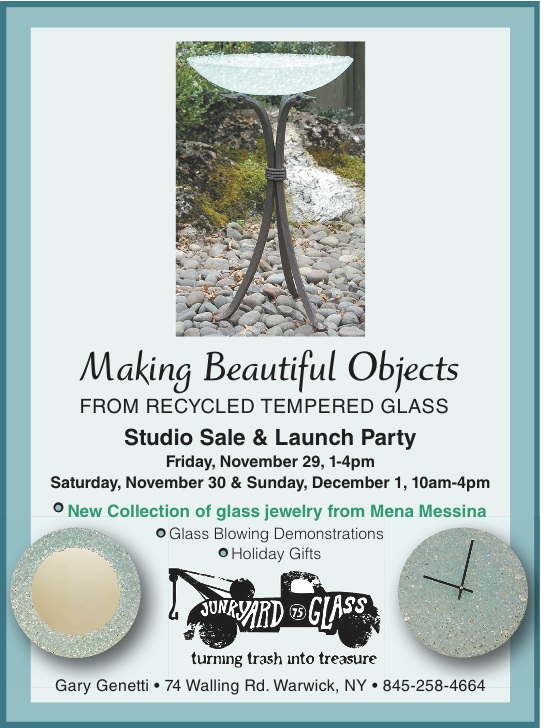