Under the Sol Niger: The Paintings of Juanita Guccione 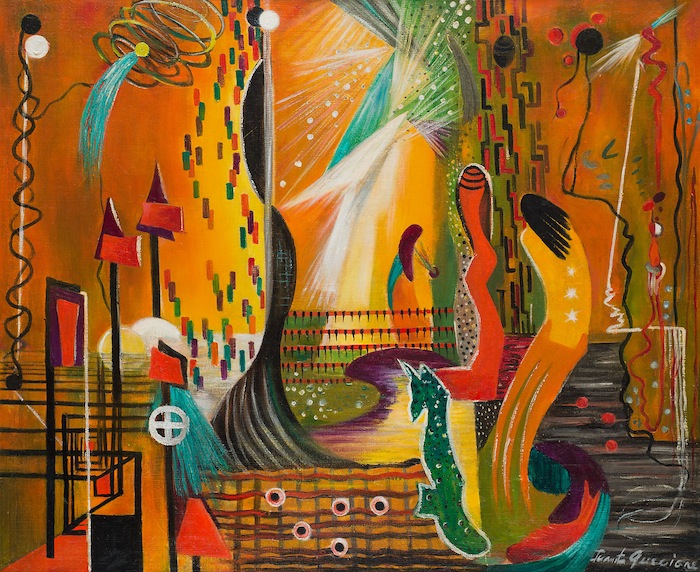 Like many of the women artists associated (even peripherally) with Surrealism, Juanita Guccione eschewed labels of any kind, and with good reason.  Her life was rich with diverse artistic mentors, spiritual traditions, and creative developments that make it impossible to reduce her nuanced body of work to one movement. Nevertheless, Surrealism’s wide cultural influence, particularly strong in the United States during World War II when many of its artists were exiled and living in New York City, is not to be underestimated.  Guccione, who met Surrealism’s founder and leader André Breton at this time, was drawn (like many women artists from the Americas and elsewhere), to the potentials of its pictorial language.

As the scholar Gloria Feman Orenstein astutely observes, the women artists associated with the surrealist movement can be conceptually linked with Breton’s conception of “The Great Transparents,” a proposition he developed while in exile in New York, that banished Man from the mythological center of the universe in an attempt to create a new and more relevant mythological structure for humanity.  Orenstein states: “The women artists of the surrealist movement can be perceived metaphorically as the Great Transparents, as Breton defines them – beings whose stature and significance is immense, but who are overlooked and dismissed as nonexistent.”[1]  Orenstein firmly places Guccione in this category, noting the artist’s formation of realms presided over by powerful and strong Amazon-like women, such as those seen in Masquerade (c. 1946).  As she and Djelloul Marbrook attest, this was likely due to Guccione’s earlier and formative experiences with the Ouled Naïl, a matriarchal tribe in Algeria that she lived in close proximity to.

The influence of Surrealism, however, can also be seen in Guccione’s earlier abstract paintings from the late 1930s and early 1940s – before her contact with Breton. In works such as Christmas (c. 1937) and Distractions (1940) there is a bright color palette, rhythmic arrangement of form, and use of organic shapes that bear some pictorial relation to the works of Joan Miró and others working in a biomorphic surrealist style.  Around this time the artist begins to insert certain symbols that reflected her life-long interest in esoteric belief systems such as Sufism, Rosicrucianism, Theosophy, Kabala, Tarot and astrology.  Checkered floors, crosses, orbs of light, stairways, and spirals suggest secret codes and access to alternate dimensions.  Cosmological configurations such as comet-like flashes, crescent moons and full moons appear frequently and transition into her figural work where they take a more prominent position.

The Sol Niger of alchemical traditions and Jungian psychology becomes a signature emblem for Guccione, hovering in dramatic skies streaked with unearthly colors to create a haunting and mysterious ambience.  The black sun can represent the melancholy of the artist who metaphorically must explore darkness in order to gain greater self-knowledge, or perhaps the transformation of trauma into growth and life.  In Acrobats (c.1949) two androgynous figures set in a metaphysical landscape have chin in hand in the age-old gesture of contemplation and sadness.  Under a Sol Niger a black and white checkerboard floor hints at the reconciliation of opposites while the rope ladders of circus performers suggest ascension and transformation.  Painted in 1955, On the street of chance displays a plethora of gaming equipment, again under a black sun set in an apocalyptic sky.  Aside from any personal meaning for the artist, one cannot help but recall the surrealist love of the role of chance and play in artistic production.

Guccione’s late work is particularly engaging as by then she had condensed the various strains of her work into a singular vision where strong color in combination with her arsenal of symbols attain a lyrical crescendo.  In Vigil (c. 1983) floating ears and eyes accompany a figure seated near stairs (a medium channeling sights and sounds?) – while fantastical orbs of light joyously skim across the vibrant purple background.  By this time the New Age Movement is in full stride and Guccione’s work seems not only to have heralded its coming, but her entire oeuvre can now be understood more respectfully by a population conversant in esoteric color symbolism and cryptic emblems.  Juanita Guccione’s art was undoubtedly ahead of its time, and luckily for us we have the opportunity to fully savor its beauty and more thoughtfully contemplate its layers of meaning.

[1] Gloria Feman Orenstein, “Down the Rabbit Hole: An Art of Shamanic Initiations and Mythic Rebirth.” In Wonderland: The Surrealist Adventures of Women Artists in Mexico and the United States, Los Angeles County Museum of Art. Los Angeles: 2012, 74.